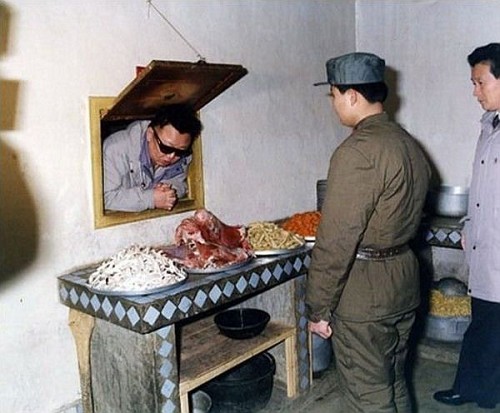 I’ve had this picture open in a window for hours now. I keep on coming back to it just to check it looks the same as it did earlier. It often does. You’ll notice I haven’t edited it in my usual hilarious fashion, and that’s with good reason. Just look at it. Try and take it in. It’s North Korean Gloriously Ronery Mega Leader Forever (Until He Dies In A Week) Kim Jong Il, leaning through what appears to be a serving hatch, confronted by a table of food.

It’s a bizarre situation, not just in the picture, but in the fact that this is a photo of the man in charge of one of the strangest and – apparently – most horrible nations on earth. His people are perpetual victims, living under a regime they can do nothing about, indoctrinated into thinking this is the best thing for them and threatened with execution if they so much as keep a bit of food for themselves or their families. Oh, and famine is (again, apparently) a major killer in the country.

Then there’s all that nuclear ambition stuff, the shelling of South Korea and other such events which look to the untrained eye like blatant provocation, attempting to push people into a costly conflict. Well, either that or THQ have a bigger budget and more creative marketing team than I gave them credit for.

Yet here is their leader – a man we should all rightly despise – leaning through a hatch, observing some food. That’s all he’s doing, but that’s also what he’s doing. If it were someone else it really wouldn’t be much to remark on, never mind blog about, but because he is who he is, it’s something I’ve had open in a window for hours now. It’s something I’ve kept on coming back to just to check it looks the same as it did earlier. It often does.

[The pic is from this site, which I could not recommend enough. It’s surprisingly funny.]

Tagged as funny picture, i dont know why this has amused me so much, kim jong il, looking at things, north korea, surreal

2 responses to “Kim Jong Il, making me laugh as usual”