I am not glad Jim Henson is dead

What is it about Jim Henson’s (and latterly his Workshop’s) puppets that’s so bloody brilliant? Regardless of what production you see them in you can always tell they’ve got the Henson name attached somewhere. There’s a warmth in the detail on the characters that really resonates with me (and a few other people).

Well, apart from the Gelfling twats in Dark Crystal. They just look shitty and bland.

It sort of makes me wish I had any talent whatsoever when it comes to… I don’t know – puppetry? Designing characters for 80s fantasy films and kids TV shows? Fronting a campaign to see a revival of Dinosaurs? I have no idea. It just makes me wonder what it would be like to have a part in making such timeless creations.

I’ll get bored of this train of thought within the next hour or so, I’m sure. Match Of The Day is on soon anyway. But while I’m still thinking along these lines I think I might go and create some puppets. Here is a drawing of my first creation, named BUSEY: 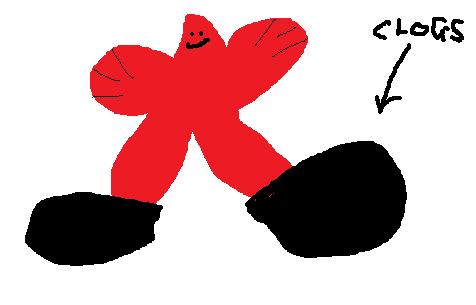 I think it’s pretty easy to tell what sort of films I’ve been watching recently. Also: that I’m really talented.

Labyrinth, or: how to annoy someone for 20+ years

I will never for the life of me understand this here point that is never addressed in Jim Henson’s Labyrinth: why David Bowie has such a big crotch.

No, wait – not that one. The other point. Ah yes, I remember: during the Bog Of Eternal Stench scene, whaserface and her cohorts have to cross said bog (which produces an eternal stench). To do so, Bianca from Eastenders does that rock song she does to make some boulders rise out from below the waters. Fair enough.

But surely, on crossing said newly-rised rocks, there would be residual stench passing over from the water left on them, thus making Jennifer Connelly’s shoes and the feet of all the others smell forever. In the words of Walter Sobchak: am I wrong? Am I wrong?

Having just watched Labyrinth for about the three billionth time in my life I can safely say this is one of the things I thought of as a child and have never quite managed to get out of my head. It just makes no sense. I mean, the exposition leading up to the Bog puts you in no doubt: coming into contact with the stinky water (not a euphemism) will make whatever it is that touches it smell forever.

Yet no mention is made of Jen-Jen’s farty shoes, the dog’s honking paws or Ludo’s massive, shit-stenched, oafish feet. It sets up the logic then immediately contradicts it.

I’m going to write my complaints to Jim Henson himself, see what he has to say about it.