Lateness, and other inspired blog titles 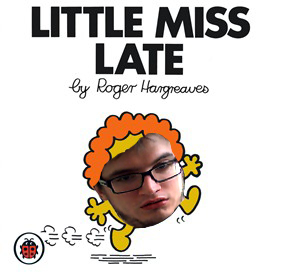 I was properly late for the first time in this job (so the first time in just about a year, really) the other day. I turned my alarm off the day before and forgot to turn it back on. Simple, innit. Unsurprisingly, it acted as some kind of catalyst for this entry. WHO WOULD HAVE THUNK IT?

I want to be the kind of person who can say “I don’t understand lateness, or how people can be late – I’m always on time and I expect the same of everyone else”. I could actually say it, obviously, but it would be a bit of a porky pie. See, I do understand why and how people are late. Shit happens, you mis-time things, sometimes you forget, sometimes your alarm doesn’t go off. It’s understandable.

But that’s not to say I understand under any circumstances. See, I can understand running a few minutes late. I can understand being a bit later than that because of a transport issue, or an accident on the road, or a menacing racoon standing in your way. Things like that make sense. But when people are just an hour late – two hours late – for no real reason, that’s when I start getting confused and ever so slightly annoyed.

I’ve been one of these people who has been very late to something on a consistent basis, but this wasn’t social engagements with friends: it was a job. And this wasn’t any old job: it was a job I didn’t particularly care about. That’s my justification for once turning up at 2.30pm for a 9.30am start and I’m sticking with it.

But seriously – if you’re one of those people who runs an hour, two hours, three hours late to meet me somewhere then I HATE YOU. Also: get a fucking grip.

Tagged as being crap at getting there, lateness, stuff like that, tardy, tardy is a stupid word, timekeeping