Shopping without many shops

I do prefer shopping online to shopping in Real Life for a number of reasons – not least of which the facts that it’s usually cheaper and is always a lot easier. But there are some things that tend to go wrong with it. Things I really could and should learn from.

This dawned on me when I just sat here and counted: I now own six pairs of prescription spectaculars, and I don’t think I actually like any of them. There’s old faithful, purchased alongside my now-residing-at-the-bottom-of-a-lake megapair back in 2007/8, then there’s the other five.

They were all bought from a couple of websites offering cheap specs. Now the problem isn’t that – the lenses work, they are as advertised etc de blah. The problem is I am an idiot who doesn’t think, or really look before buying.

I do not belong in the 90s teen tech-romp Hackers.

The same goes for shirts, jeans, shoes – loads of stuff I have bought online. I’ve had some successes, but there are so many pairs of shorts and jeans I’ve given away or binned as a result of picking them up without paying attention to the fact they were skinny fit, or a horrible colour, or didn’t go past the knee (SHORTS SHOULD ALWAYS GO PAST THE KNEE UNLESS THEY ARE FOR SPORTS).

I’d complain more, but the grand total of what all this shit has cost me is far less than what it would be were I to just buy one or two things in the flesh. Especially the glasses. We’re talking about £80 for five pairs – less than old faithful alone cost all those years ago.

I mean, none of them really suit, but so what? CHEAP.

I have problems with how I behave on the internet. I don’t fit in with what seems to be the normal way of doing things, and it’s all down to my damn idiot brain not letting me fit in. Stupid brain.

I will, do, have and willdohave say: “I behave online as I behave in real life” and that is true. I treat people politely, generally, only argue when really pushed into it/when I absolutely know I’m right or the other person is completely wrong (or if I want to argue with them) and I don’t resort to petty name-calling, threats or anything else you see everywhere from Reddit to the Grauniad*.

But the reason for it isn’t some altruistic notion of goodwill to all humanity and general, basic politeness – well, it is in some respects. No, it’s more just the fact that I am the Socially Awkward Penguin. LET ME EXPLAIN.

I simply cannot get over the mental wall I put up – I associate what I say with having an effect on someone. A real person. If I am to annoy them in any way, this thought would make me feel bad. If I am to argue, it irritates. I cannot insult as I don’t do it much in real life – at least not seriously, or to people’s faces when it is serious. Basically, I find it difficult to distance myself from the reaction of others.

Maybe I’m insane and should just stop being such a brilliant ball of empathy. YOU’RE ALL FUCKTARDS TROLOLOLOL etc.

*The only two sites I read.

FREE LCD TV! (not really, but something boring about shopping instead!)

Shocked you may be to learn this, but I am not what you would call ‘a shopper’. I don’t just not shop for things until I really have to, I actually let stuff like clothing fall to pieces before I will replace it. Some would say this is thrify, but they are idiots. I do this because I despise shopping. I never browse. I never want to aimlessly walk around for hours on end, comparing tops and going “I want it, I can afford it and it will work out as a sound – and fashionable – investment. BUT OHMYGOD SHOULD I BUY IT I DON’T THINK I WILL OHMYGOD” thirty two times in the space of four minutes.

Transport me to the world of online shopping though, and things are a little bit different. Make that online shopping for electronics and technology and you’ve got yourself some bona-fide nerd levels of interest going on. Case in point: I spent two hours this morning doing nothing but traipsing through reviews and prices for televisions, just because I may, as some point in the next month or two, be able to pick one up for cheap.

It’s not even a certainty, yet I’ve spent hours of my day doing pretty much nothing – even less than when I’m playing games or watching TV or films – because I’ve… sigh… enjoyed it. I’m not hugely technically-minded, but I know what the numbers and acronyms stand for. I can see why it might confuse people, but not me. And as a result, I want to read about the difference in performance between a 10m HDMI lead and its gold-plated equivalent. I want to know how the TV can be hung up on the wall. And I do care that the contrast ratio is less than I expected it to be.

So yeah. Turns out I do like shopping. Damn.

Tonight I immersed myself into an alien world, the likes of which I had never before been privy to. No, I hadn’t decided to eat a salad – far worse. I played online bingo for a bit to see why they seem to advertise it to insane fat women on telly. It’s all in the name of research, obviously.

I can actually see why the bingo in particular could eat so much into someone’s funds – and I don’t just mean from the perspective that gambling is so deliciously addictive (my self-imposed deposit limit on Ladbrokes is testament to that*). No, what I played was so insanely easy to do, so laid back and so out of your hands it’s easy to forget you’re actually playing with real money. You simply click a couple of buttons to buy your tickets then either sit there watching intently, maybe chatting with the reams of pillocks in the chat section, or just go do something else for five or ten minutes and come back to see if you’ve won money. That’s bloody dangerous for a bored housewife/husband/drunk bloke who is bored (not me. I’m not drunk).

I’m actually writing this while a round is playing out in the back – I can see it behind this Word document. I have three balls to go, apparently. Which isn’t something I hear often. If I get a full house I’m able to take home the tidy sum of £21.91 – not too shabby, seeing as that would feed me for a couple of weeks… In fact… I really could win at this… It could be better than working… I could live the high life, free from responsibility and able to buy all the beans I want!

Or I could play blackjack… Or roulette! Always bet on black… Hmm…

*That makes it sound like I have a gambling problem – I don’t. I rarely, if ever gamble.

Tagged as betting, bingo, can i afford beans?, gambling, ladbrokes, losing money for no reason, online 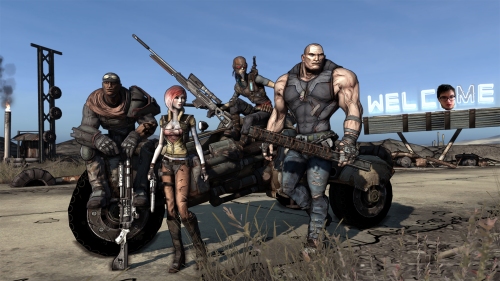 A quick bash on Borderlands starting at around 9pm last night – an hour or so, before Match of the Day and a bit of progress for my Brick character. Or so I thought. The addition of two chums (and a few interchangeable randoms) and you have the recipe for roughly seven hours of play. Seven hours. And this is exactly why Borderlands is pretty much better than you.

It’s absolutely compulsive stuff in single-player, of that there’s no doubt. But it doesn’t really smack of any kind of genius; it’s just a well-made title that appeals to the hoarding part of the brain, for those who actually have that part of the brain. Obviously. In fact, I’d go so far as to say it’s almost boring – annoying, even – when you play Borderlands alone. Hours of running backwards as endless streams of irritating, snappy enemies run straight at you. It’s not so much fun as it is outright addictive.

But then you throw in a couple of mates, and you end up playing the bloody thing for about seven hours, forgetting to eat, drink, visit the toilet or talk to yo’ woman (SORRY ANNA). What changes? Well it actually adds enemies the more players you have working together, so surely that should just make it more annoying? Well, yes, on paper. But then, on paper Borderlands should be a bag of shit anyway – a game where all you do is run about killing roughly three types of enemy for dozens of hours, picking up thousands of pointless items. But just like Communism, what’s on paper doesn’t necessarily translate to the real (virtual) world. More people = more fun. You can actually use character classes as they’re meant to be used, work together as a team and – probably best of all – spend ten minutes standing in a circle throwing weapons onto the ground in the middle for the group to peruse. Sod your MMOGs, your MAGs and your OTHER UPPER CASE ACRONYMS: Borderlands, four (or three) people and a bit (lot) of spare time is all you need.

Oh, plus it helps when Rich is a big flaming prat who kills everyone for you. Makes things less irritating, at least.

Problem is, now I’ve got to remember to avoid a “quick bash” on Borderlands today, as I have work to be getting on with. Stupid time, gets in the way of everything.

(Today’s entry brought to you by: not saying everything you want to say about a game; the need to get some work done dominating your mind; really wanting a cup of tea; tiredness; hunger; AVARICE) 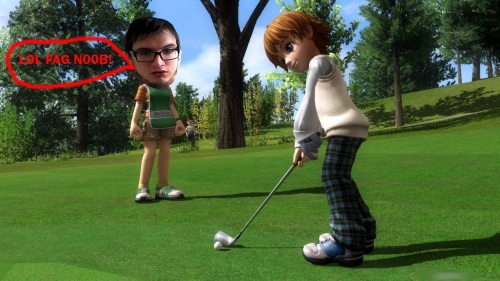 I made a bit of a mistake today – I turned on the PS3 and popped MAG into the disc drive. I don’t say mistake because it’s a bad game – I haven’t played it enough to form any coherent opinion on it yet*. I say mistake because, as an online shooter, it is full of the worst people in the world. The kind who exist to both make my life hell and to show us that, actually, gaming is the pursuit of utter wanktwats. And not fine, socially-adjusted, interesting, witty, fun, outgoing, fashionable, upstanding members of the community like myself.

No, these are questions we could not answer even if we wanted to, for the reasons why they happen simply do not exist. There is no logical basis for why any one of these things occur all the time, never mind ALL of them. In fact, the very thought that all of the above things go on all the time in games like MAG, Modern Warfare 2, Halo and the like offers up a bulletproof argument that there is, indeed, no god.

Where was I? Ah yes – online etiquette. Playing games. You’re mucking about, get over it. Don’t sing, unless it’s funny. Don’t insult, unless it’s funny. Basically, what I’m saying is: why aren’t all online communities exactly the same as on Everybody’s Golf World Tour? Never before had I played a game online against strangers and managed to go more than twenty minutes without being called a ‘wop kike coon homo’ (or some variation thereof) until I fired up EG. The people aren’t just polite; they’re encouraging, friendly and seem to genuinely want to have a good game, rather than just insult you and scream bloody murder should you win.

Basically what I’m saying is that I want to be a cyber-50-year-old man.

*It’s a bit shit though, if we’re being totally honest.