Superheroes exist. Alas, I am not one of them

I saw this link on Reddit (obviously) earlier and had a swift look, my interest obviously piqued at the fact there seemed to be real life superheroes In Real Life. Obviously my natural cynicism – that which would serve me so well as a natural defence in the wilderness – didn’t let me view it as anything more than some stupid bastards dressing up like twerps. But then I started reading.

Surely these fools wouldn’t be stupid enough to actually act as a vigilante and police the streets? Wrong. Ah, but if they were to do that, surely they would need to encase themselves in stab-proof armour, bullet-proof vests and all other manner of protective clothing, rather than just a silly costume? Well, yes – that’s exactly it. But surely they’re all deluded idiots who probably cause more problems than they do good? It would appear that isn’t always the case.

Once again, reading has got the better of me and made me realise my kneejerk (emphasis on ‘jerk’) reactions are often a bit silly.

So it has me thinking, naturally, about what kind of super hero I would be; what would my motivations be? My name? My costume? My calling card? And how short a period of time would pass after I started my quest of superheroics before I died? ANSWERS:

1.       My main motivation would be money, though I would be open to other such trades in lieu of cash remuneration. Kittens, mainly. Delicious kittens.

3.       The costume would be a mix of medieval knight with cyberpunk noir. Basically I’d look  like a twat even in the Deus Ex universe.

4.       My calling card would be a small rectangular piece of cardboard that would have my phone number on it and the message “this is my phone number, but please don’t call me as I don’t like talking on the phone”.

5.       Seven minutes. Including the five minutes it would take to get to the crime scene.

Some shit blog about not liking superheroes 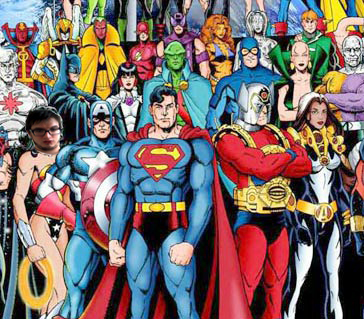 I’ve never really been big on superheroes. Shocking I know, what with me being both male and a massive geek. But they’ve never really done it for me, beyond a tiny amount of interest and a bit more when the superhero movies got all popular and sheeit.

I see absolutely no appeal in Superman. He’s the cheat code of the superhero world, and anyone who likes him is clearly a prick (apart from you, Mike). What’s that? Insurmountable odds? Oh, he can just beat them by being better and inventing powers we didn’t know he had. And Smallville is shit.

Spider-Man? Irritating prick. Batman? Not a real superhero. Robin? Dislikeable tights. Fantastic Four? Not enough Jessica Alba. Plastic Man? I don’t even know who he is, or if he’s even a good guy. Wolverine? Too popular/Hugh Jackmanny. Beer  Keg Man? I just invented him

In fact, the only one I really like is Preacher. Problem being, he isn’t a superhero. Also he didn’t use his power nearly enough, which was annoying. I mean, it was the Voice Of God – if he tells you to do something, you do it. Hence the “go fuck yourself” line providing endless hilarity. Hey ho.

Generally speaking though, most of these bastards leave me cold. Sorry, lost some geek points there I’m sure.

Oh, I also love The Punisher, but he had no powers. Just MASSIVE FUCKING GUNS. So I can justify that to myself.