I know people who are scared of dying, all the time. Those who aren’t too pleased about the thought of getting old. Some who lose sleep over the thought of being alone. One who squeals at the sight of cotton wool.

I know people are scared of odd things, and I know them quite well. Also: I’m scared of volcanoes. And to be honest, I think it’s a more pertinent and correct fear to have than any other fear I’ve ever heard of. Why? These are scars in the earth that are set to explode.

If every volcano in the world just decided to erupt at the same time, the world would probably end. I have no actual evidence to back this up, but I reckon it’s pretty true. There are hidden supervolcanoes in certain places around the world that could kill millions with the least effort.

Lava can melt your soul. Explosive flying rocks will kill mercilessly and without reason. Volcanoes and earthquakes are best mates. Some volcanoes never stop erupting. One was even enough of a shit to stop people from making international flights. Sure, it wasn’t enough to kill anyone, but it’s just another reason why volcanoes are bastards: they sometimes do things just to be dickheads.

If I ever meet a volcano again (I met Teide in Tenerife, a few times. He is my nemesis) I’m going to smack it in its stupid face. Not too hard though, I don’t want it to go off. 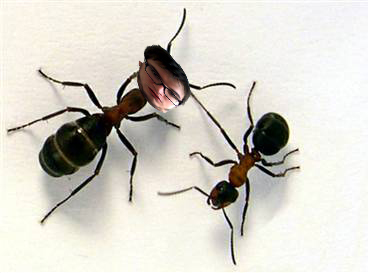 My flat is currently under attack. Well, more like under siege, except without Seagal. And I can be beaten in the kitchen. No, this is a siegettack from the industrious little bastards of the insect world: ants. They’re not overrunning the place but it is slightly annoying, especially as I haven’t layered the floor with a combination of honey and sugar (read: it’s not covered in ant food here). But still they come.

I have decided to fight back though. This aggression will not stand, man. I have been looking into ways in which I can combat these little bastards in order to stop them being on my table every now and then. Gits. The training has so far encapsulated watching both Alien and Aliens – we all know the xenomorph is similar to an ant in many ways, so it’s a fine way to figure out how to combat them. I am currently building a flamethrower, and the motion tracker just has a few faults to iron out (namely: it doesn’t track motion). I have so far discovered that I can shout “LET’S ROOOOCK!” at the ants and they… react. A bit.

The second element of training has been in video game form, and has been to play Earth Defence Force 2017. This game sees you running around the world, destroying the threat posed by giant ants of doom. I have learned you should buy an assault rifle, as well as hide in the sea for a bit. The sea is quite close in Bournemouth, so this could work nicely. See the attached:

I think, in the long run, the ants are going to win. Must step up the training efforts.